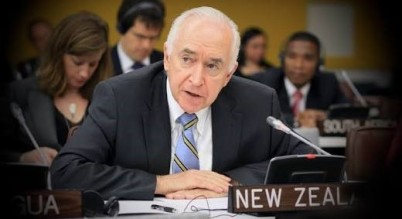 December 17, 2022 marks a significant milestone in the history of the Ombudsman.

On that day, in 1982, the Official Information Act was passed into law. Since then, successive Ombudsmen have upheld its principles and overseen an official information regime that has earned New Zealand a reputation as one of the most open and transparent democracies in the world.

But how did we go from the Official Secrets Act, under which information was seen as the property of the government, to the diametrically opposed Official Information Act?

Sir Jim McLay was Justice Minister in the Muldoon government in 1981. And it was Sir Jim who introduced the Official information Bill to the House on July 23, 1981.

In a recent interview, Sir Jim recalls the background to the bill, referring to it in his speech to Parliament as “one of the most significant constitutional innovations to be made since the establishment of the office of the Ombudsman in the 1960s”.

Sir Jim says he was an early advocate for access to official information.

“Certainly I expressed that view even before I was elected to Parliament (in 1975). I actually intended to include it in my maiden speech but I ran out of space, so I had to do some culling, and this fell by the wayside.”

The draft bill was included as a recommendation of the Danks Committee, formed as a result of a report by the first Ombudsman Sir Guy Powles into the SIS’s handling of the espionage case of Dr W. B. Sutch.

Of the Danks report, Sir Jim says: “It was under my control as minister. It gave us a couple of interim reports and then a final report which included a draft bill, which had been drafted by Walter Iles, who was the chief parliamentary counsel of the day and who was a member of the Danks Committee.

“That draft bill could very easily have been pigeonholed and never acted upon. I concluded that if I wanted to act and make progress on this, the only way was to introduce the bill as drafted by Iles without any changes whatsoever and allow Parliament and the select committee to make such changes as were appropriate, and indeed to decide whether or not the legislation should be passed into law.”

In his speech, Sir Jim said: “… it materially alters the delicate balance that exists between the citizen and the State, not by diminishing the effectiveness of government but rather by greatly increasing the rights of the individual in his or her dealings with an otherwise all-powerful State. In doing so it very substantially enhances the freedoms of each and every New Zealander”.

Looking back at the 40 years the Act has now been in force, Sir Jim says it has stood the test of time “remarkably well”.

“I’d always believed in the cause of greater access to information and I think we can say with some pride that the concepts that were contained in the bill were repeated in legislation that was passed in other similar western-style democracies.

“I regard it as one of the most significant pieces of legislation I took through Parliament, certainly of great constitutional significance. I think it does really reflect well on New Zealand that we were very early to this cause of freedom of information and that we passed into law some legislation which has not only stood the test of time but has provided the model for a number of other countries introducing their freedom of information regimes.”

To the current generation of politicians and government officials, Sir Jim has some advice.

“I think one of the things we’ve got to guard against is government departments and government agencies working to avoid or circumvent the Official Information Act. Over the years there have been several instances where it was very obvious that compliance with the Act was long delayed to avoid disclosure of information under its provisions.

“Transparency is all important. The availability of information is all important. Information belongs to the public, not to governments, that’s one of the underlying principles behind the Act. But the overriding philosophy is that information should be released unless there are good reasons for non-disclosure. If we remember those words in the preamble to the Act, and make that the guiding principle, there shouldn’t be too many problems in making it work.

“While after 40 years, it’s not unusual to review the application of a particular piece of legislation, it should always be the fulfilment of that preamble upon us,” he says.

Learn more about the history of the Ombudsman